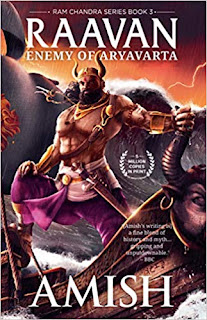 So, after reading and reviewing both of Amish’s previous books, I have decided to do so for the third book as well. I expected a lot from it, and it gave that and a lot more. This, in my opinion, is by far the best amongst the three. What I liked about it best are the plot twists, which are numerous and quite unexpected at that. Before I go into my experience about it, I would like to give you a short summary of the story, as this is about Raavan’s past, something not most of you will be familiar with.
The story does have elements of the author’s creativity, but the approach is very different and takes a shot at justifying the cruel behaviour of Ravana.

Raavan, the eldest son of Rishi Vishrava and his first wife Kaikesi, was perfect at everything he did, except one thing - compassion. With ups come the downs, and this was Raavan’s - compassion. Despite being the best, he was never actually loved by his father, but instead was an embarrassment. All because he was a naga. A naga was a being who had outgrowths which would continuously hurt, and sometimes bleed, and if not treated, could lead to death. Raavan had an outgrowth at his navel, and Rishi Vishrava blamed this on Kaikesi, saying that he was paying for her bad karma. On Kumbhakarana’s birth, when Rishi Vishrava realised that the baby was a naga too, he sent a woman to go and kill the baby. However, Raavan along with the help of his maternal uncle Mareecha, escaped with Kaikeyi and Kumbhakarana to start a new life. Equipped with his ruthlessness and skill, he sets about to build a trading guild like never before. Everything seems to be going perfectly for Raavan the pirate king, until the death of a loved one finally pushed him over the edge, into this darkness that he couldn't seem to get out of. As the darkness engulfs him, he slowly starts to plot the end of the Aryavartas. He would steal everything from them the way they stole the one person dearest to his heart.