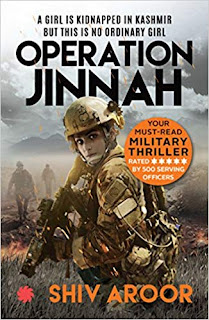 A girl is kidnapped in Pahalgam, Kashmir, her two friends shot dead. This kidnapping would have been no different from others, had it not been for the girl - Varuna Rana, the daughter of the famously infamous Admiral Nirbhay Rana. Whispers of his name had surfaced when people talked about a mission from the past which was shrouded in a cloak of secrecy so thick that it had become more of an urban legend or myth. When his daughter goes missing, and a ghost from his past comes to haunt him, Admiral Rana must assemble the same team that helped him on a mission seven years ago in Pakistan occupied Kashmir, this time with his daughter and the reputation of his beloved motherland, India, at stake. With less than nine hours to deliver, the whole team – Lieutenant Commander Akeela Thomas, Lt. Vikramaditya Singh and Lt. Saraswati Subramaniam, dive into a mission with no way out. Will they succeed, and save the face of India, and more importantly, will they come back alive?