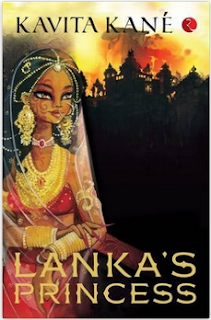 Whenever we think about the Ramayana, the only characters that come to our heads are Rama, Lakshman, Sita, Ravana and Kaikeyi. To think about it, one of the most misunderstood characters in this whole epic is Surpanakha. The evil sister of Ravana, who instigated Ravana to kidnap the innocent Sita, is the image portrayed if you read the Ramayana. Once, when I was reading the Ramayana, a question popped into my head. “Why hasn’t the history of Surpanakha been described? How was she like in her childhood? Was she evil from the start?” Was my question. Then I came across this book called ‘Lanka’s Princess’ by Kavita Kane. This book was the answer to my question. Lanka’s Princess, by Kavita Kane, talks about Surpanakha from the time of her birth till her death. It portrays her in a different manner, more in a sympathetic one. Before I tell you my views on the book, I’d like to tell give you a hint of the story.

Surpanakha, the daughter born to Kaikesi and sage Vishravas, was hated by her mother from the time she was born. Her mother, was an asura princess, who had married her father in order to gain powerful sons, who would help win back the throne of Lanka, her father had lost to Vishnu, during a war to usurp her father’s throne. She had three sons, but she had not been satisfied and wanted another son, which is why she despised Surpanakha when she was born. She was not named Surpanakha, she was called Meenakshi, the one with the large beautiful eyes, like that of a fish. The name Surpanakha stuck when she scratched her brother Ravana, with her unusually sharp and long nails, when he killed her pet lamb, Maya.

Meenakshi always felt left out in the family. Only her gentle brother, Kumbha Karana payed a little attention to her. Her mother was partial to Ravana and her father to Vibhishan. She adored her father and her Nani, Taraka, the only people she felt affectionate towards. One day, her step brother, Kuber came for his regular visit and grabbed Meenakshi to take her as a hostage, as he had heard that Ravana and his two other step brothers had gone into meditation to help usurp his throne. He wanted assurance that they wouldn’t do so. Meenakshi saved herself using her nails. When Ravana returned, he was furious and that made him strengthen the resolve to win Lanka. Vishravas, sad to see his son in such a state, left the family forever, with Ilavida his first wife whose son was Kuber, after Ravana won Lanka. 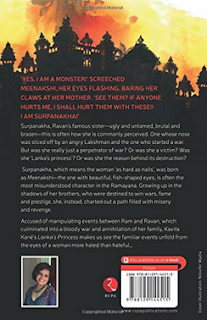 After this, Meenakshi started hating Ravana as he was the cause of her father leaving. Now she did not have the two people she adored, her father and her Nani, who had recently been turned into an ugly monster by Rishi Agastya. Later, at Ravana’s wedding, she found the perfect husband for her, Vidyujiva, also known as Ravana’s biggest enemy. Twelve years after her marriage, she begets a son. When her son is hardly five years old, Vidyujiva is brutally murdered by her own brothers! This was mainly son by Ravana. Deciding to seek revenge she left Lanka. What are her plans for Ravana? What turned a beautiful Meenakshi to a cruel, heartless Surpanakha?

In my opinion, it’s an extremely well written book, minus the part where she describes the romance between Surpanakha and Vidyujiva. I thought it to be unnecessarily added in the book. She wonderfully describes the mixed feelings of Surpanakha throughout the whole book. Kavita Kane showed us the other side of Surpanakha. The kinder one which, due to a twist in fate, transformed her personality so much. She teaches us to think before you form an image in your head. She tells us the same story of the Ramayana, through the eyes of Meenakshi, which changes most of the story. Meenakshi was a brave woman, with many qualities to admire. It was tough to lose her two favourite people who she adored the most, when the others hated her. It was a pleasure reading this book.

Email ThisBlogThis!Share to TwitterShare to FacebookShare to Pinterest
Labels: Ramayana