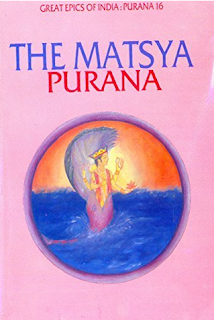 The Matsya Purana is my third review of the Puranas written by Bibek Debroy. He had translated the unabridged version of the whole Mahabharata in English, with eleven volumes, the eleventh volume being the Harivamsha. Earlier he has translated an abridged version of the eighteen Mahapuranas. I have reviewed two so far, and this is the third I’m going to be reviewing. To know the basic facts on the Puranas, you can read the earlier reviews I’ve written. Let me start by telling you the basics you should know about the Matsya Purana. Firstly, the Matsya Purana is the sixteenth Purana in order, not of importance. Secondly, the Matsya Purana is a tamasika Purana, which means it praises Shiva more, though it has the name of one of Vishnu’s avataras. In reality, it is Vishnu who is narrating this Purana to Vaivasvata Manu. It consists of fifteen thousand shlokas in all. It has a few similar stories to the Shiva Purana. In this Purana, I didn’t find the stories as interesting as a few interesting things shared in the book. I’ll mention them to you

Firstly I found the facts on giving daan very interesting. You will come upon them when you have read most of the book and you are nearing the end. There are sixteen ways of giving daan. All of them are listed below.

The second thing I loved the most was when he described the time a house should be built. The points you have to remember while building a house are:
One story we commonly know is the story of Sanjana and Surya. There is a particular part that we don’t know about. When Sanjana took the form of a mare and was meditating so that Surya’s radiance would reduce. After Sanjana’s father had chipped a small bit of his radiance, Surya took the form of a horse and joined Sanjana. At that time, Sanjana gave birth to two twin sons. Those two twins were the Ashvini twins. This has not been mentioned in many versions. This was a part of the story I liked, as I haven’t read this in the versions of this story which I’ve read.

The last part I liked was when Bibek Debroy talks about ब्राह्मण (Brahman). During the creation of the universe, there was darkness and the Brahman. We cannot describe the divine essence brahman, as it has no traits that can be described. The Matsya Purana says that the brahman repelled all the darkness, and divided itself into three parts. Those three parts are known as Brahma, Vishnu and Shiva. All the Puranas have different versions on the creation of the Universe, if you happen to read them. This I found to be the most interesting of the versions I’ve read of. It talks about the Brahman, which is the divine essence said to be formless. This is the part I enjoyed the most. It told me about Brahman, a term I had vaguely heard about.

These parts were my favourite. This book was one of the best from the other two Puranas. This is easy to understand, and can be read by kids. It gives us a lot of information on our ancient texts, the Puranas. Bibek Debroy’s Mahabharata, though long is written beautifully in simple English. One should really read the books written by Bibek Debroy. Also read my other two reviews on the Puranas: