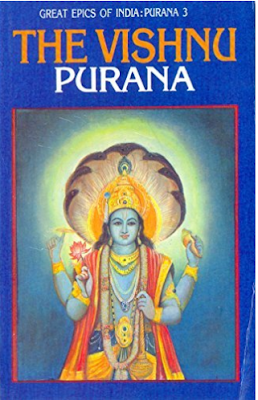 This is the thirteenth purana I am reviewing, and it is a sattvika purana. After this, I only have one other sattvika purana to read which is the Varaha purana. All the Puranas have been composed by Vedavyasa, except this Purana which was composed by Vedavyasa’s father Rishi Parashara. This Purana comes third in the order of Puranas and contains twenty-three thousand shlokas. The Vishnu Purana is narrated by Rishi Parashara to Rishi Maitreya who came to him to know about the creator of the universe. It is then that Rishi Parashara narrated the Vishnu Purana. The Vishnu Purana is divided into six major sections or amshas and the last amsha is relatively short. This Purana starts with the creation of the universe and goes on to talk about elements that are commonly included in most Puranas like the different kinds of hells, and the geography of the world. The first few stories are stories that I have commonly read in the rest of the sattvika Puranas. The story of Dhruva, the churning of the ocean, the story of Prahlada and the story of king Prithu are mentioned in almost all the sattvika Puranas. The rest of the stories are extremely interesting ones and are either different versions of stories or entirely new stories.


The Vishnu Purana has a lot of stories on the virtues of worshipping Vishnu, and the later parts of the book contain the life of Lord Krishna from his birth to death as a synopsis. One of my favourite stories comes when they talk about the Yajur Veda and Yajnavalka. It talks about the composition of the Yajur Veda. The second story I liked was of Shatadhanu and Shaivya that tells you how bad it is to talk to a teacher who is a fraud. I also will include a small prayer that will protect you from snakebites.

Shatadhanu and Shaivya:
Many years ago, there used to be a king whose name was Shatadhanu who had a wife named Shaivya. Both were very righteous and used to pray to Lord Vishnu every day. Once, a fraudulent teacher came to them and only Shatadhanu talked to the teacher in person. A few years later, Shatadhanu died, and Shaivya joined her husband on the pyre. In his next life, Shatadhanu was born as a dog as he had spoken to a fraudulent teacher. Shaivya was born as the daughter of the king of Kashi, and was a Jatismara, which meant that she could remember her earlier life. When her father wanted to marry her off, she wouldn’t listen as she had just realized that her husband was living in the city of Vidisha and had been born as a dog. She went to Vidisha and gave the dog food. She then reminded the dog of his earlier life. The dog slowly remembered and was so sad that it threw itself off a cliff. He died and was born as a jackal next. The same thing happened, and the jackal died in the forest, and was now born as a wolf. The same process repeated, and he was born as a vulture, a crow, and then a peacock. King Janaka was performing an Ashvamedha yajna. The peacock bathed itself that time. Shaivya again reminded the peacock of its earlier life. He died again, and this time he was born as the son of King Janaka. Shaivya married her husband, and both had many sons. When they died, they were taken to heaven. Therefore, one must not speak to fraudulent teachers who have given up the Vedas.

The Vishnu Purana mentions a small prayer that can be said that will ensure that one is never bitten by a snake. The prayer goes like this:

‘I pray to Narmada morning and evening; Narmada, protect me from snake poison.’

The virtues of reading this Purana are various, but if one reads the original purana, one will accumulate a lot of punya, and I’m sure it will take you straight to heaven.