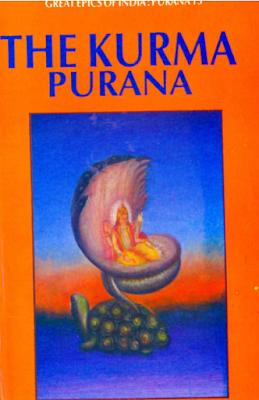 This is the seventh Purana that I am reviewing. It is the fifteenth Purana in order, and is a Tamasika Purana.

You must be a little confused at this point. Doesn’t the name clearly state ‘Kurma’ Purana, and one of Vishnu’s avatara’s was the Kuma avatara? Here is where everyone gets confused. This Purana got its name because Lord Vishnu narrated this Purana when he was in the form of a turtle (kurma), hence Kurma Purana. This Purana is seventeen thousand shlokas long, and is divided into four samhitas (sections). They are the Brahmi samhita, the Bhagvati samhita, the Souri samhita, and the Vaishnavi samhita. Unfortunately, only the Brahmi Samhita is available to us now, and goes by the name of the Kurma Purana. The Brahmi samhita is divided into two parts, which are the Purva bhaga and the Upari bhaga. The Purva bhaga has fifty-two chapters, and the Upari bhaga has forty-four chapters.

I encountered many interesting things in this Purana. One of them was when I found out that there is more than one Gita! The Gita found in the Mahabharata is only one of its kind, and to distinguish it from the others, we should refer to it by its full name, the Shrimad Bhagavata Gita. The Gita mentioned in this Purana is the Ishvara Gita. Yoga, the technique that brings about the union between the human soul (atman) and the divine soul (paramatman), is the main subject of the Ishvara Gita as it is of the Shrimadbhagavata Gita.

MY FAVOURITE STORIES
This Purana shows a slight variation in the stories that we already know, and some of them are shocking. I will share two short stories. One will be a story with a variation, and the other will be stories mentioned in this Purana.

A Digression on Goutama: Many years ago, there was a terrible drought on Earth. No one could find any food, as a famine had occurred. Several sages living in forests suffered, all except one. Sage Goutama was a very powerful sage who had his ashrama in the forest. Such were his powers, that he was making it rain in his ashrama, so there was plenty of food there. All the other sages went and begged Goutama to allow them to stay with him. He agreed. After twelve years, the drought stopped and it began to rain. Now, the sages requested to take leave of Goutama, as food grains had started to grow. Goutama asked them to stay for a few more days, and the sages agreed. All of them were jealous of Goutama’s powers, and they started plotting to bring about his downfall. They created an illusionary calf with their powers. They then sent it to Goutama. The sage saw it wandering around, and decided to take it to the cowshed. As soon as Goutama touched the calf, it dropped dead. Goutama was aghast. The other sages came to offer their advice, but by then Goutama had figured out that the cow was an illusion. He cursed the sages that they would rot in hell and would have to be born many times before they were freed. The sages started praying to Shiva and Vishnu for deliverance. Both gods found the sin too big, so they decided to teach the sages the same lesson another way. They composed a set of evil shastras, and Lord Shiva himself went down as a teacher and taught them that. As this was a sin, Sage Goutama’s curse came true.

The Sita who was an Illusion: This is the most shocking variation I have come across in the whole Purana. This is the story of Sita, with a large variation. Ravana came disguised as a hermit to abduct Sita. Somehow, Sita got to know about the plan, and was determined to not let it succeed. She started praying to Lord Agni. Lord Agni sent down an illusionary Sita, and the real Sita was absorbed into a fire. When Ravana abducted Sita, it was not the real Sita. It was a maya Sita! The whole war was fought for a Sita who was not actually there! When the maya Sita was rescued, and the test by fire was put across to her. When this Sita went into the flames, Lord Agni took back this Sita and sent back the real Sita. Thus, the real Sita was never tainted by Ravana. This story shows that righteous people can never come to any harm.

The Kurma Purana is the most sacred. Anyone who reads it attains Brahmaloka. Even if the person reads only a chapter, is forgiven of all his sins. If this Purana is donated to Brahmanas during the months of Vaishakha or Kartika, undying punya is obtained. If this Purana is read in the prescence of shudras, or recited to disbeliever’s, the person is sure to go to hell.

This Purana was interesting, and short. It gives you a lot of answers to many questions about the past regarding our culture. Most of the stories are interesting, and catch your attention. The stories that had variations were shocking, like the one I mentioned before, and you might never have heard of them anywhere else. If you found these stories intriguing, why don’t you read the Purana? I can promise you a lot of surprises, and a feeling of peace is sure to wash over you after reading these sacred texts and understanding the values they teach in them.