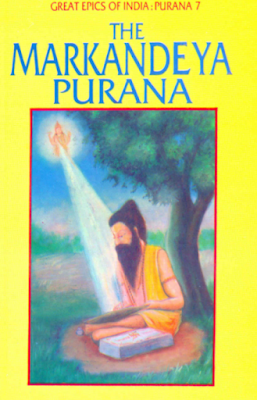 This is the eighth Purana I am reviewing, and it is a Rajasika Purana as it goes into detail about the process of creation. It is the shortest Purana and is only nine thousand shlokas long. This Purana talks in detail about a few unanswered questions from the Mahabharata. When you read the Mahabharata, questions will start popping up like, ‘Why did Draupadi have five husbands?’, ‘Why did Draupadi’s sons die in the dead of night instead of on the battlefield?’ This Purana has answered these questions. It has many stories, but focuses more on the histories of the different Manvantaras (duration of a Manu). The Markandeya Purana has 137 chapters. Towards the end of this Purana, it starts narrating stories of the goddess Chandi. In the original text, this extends from chapter eighty-one to ninety-three.

I will first tell answer one question from the Mahabharata, and continue by telling you two of the fascinating stories mentioned in this Purana. The answer to the question I am going to answer is different from what you would have heard. It is a completely different explanation. I am going to give you the answer to why Draupadi had five husbands. This explanation is mentioned in the Mahabharata is different from what is written in the Purana.

Why Draupadi had five husbands: Many years ago, there was a man by the name Trishira, who was the son of a sage named Tvashta. Trishira hung himself upside down and performed Tapasya. Scared of his Tapasya, Indra killed him. As Trishira was a brahmana, Indra had committed a sin. As a result, Indra lost some of his energy, which was absorbed by Dharma. When Tvashta got to know of this, he tore of a chunk of his hair in anger. He threw this into the fire, and from there came Vritra. As we all know, Vritra attacked and Indra asked the saptarishis to intervene. They managed to strike a truce with Vritra, but Indra took advantage of this and killed Vritra. This was also a sin, so some of Indra’s energy was absorbed by Vayu. Indra lost some of his energy once more when he committed a sin by pretending to be Sage Goutama and appeared before Ahalya. This energy was absorbed by the Ashvini twins. Now, Mother Earth came to the gods and begged them to relieve her of burden, as many asuras had taken birth on Earth. The gods agreed and decided to create beings out of their energy. Dharma used Indra’s acquired energy to create Yudhishtira, Vayu used Indra’s acquired energy to create Bhima, and the Ashvini twins did the same to create Nakula and Sahadeva. Indra then used his own energy to create Arjuna. Draupadi was created by Indra’s wife Shachi. Thus, Draupadi married all five Pandava’s. All of them were parts of Indra.

Alarka: Many years ago, there was a prince called Ritadhvaja whose father was Shatrujit. Ritadhvaja was perfect in every aspect. He had two friends who were the sons of Ashtavara, the king of snakes. His sons were always with the prince, as they found his habits so good. They would only return home at night. Ashtavara asked his sons where they went. After he had heard his sons story, he wanted to gift Ritadhvaja something. He suggested that he give the prince gold, or jewels, but his sons refused. Ashtavara insisted, so they decided to tell their father a story from Ritadhvaja’s life.

Once, a sage called Galava came to Shatrujit and asked him to help him. A daitya had attacked his ashrama and taken everything. Galava told Shatrujit that a horse named Kuvalaya had dropped from heaven. A divine voice told him that Ritadhvaja would ride the horse and kill the daitya. Galava also told him that this horse never got tired and could travel anywhere. Shatrujit gave Ritadhvaja the horse and asked him to slay the daitya. When Ritadhvaja arrived at the ashrama, the daitya came towards him as a boar. Ritadhvaja shot an arrow at the boar. The injured boar ran towards the thick forest, but the prince still followed him. The boar went down a pit, and Ritadhvaja still followed. As the pit was dark, he could not find the daitya, but instead found a city with many golden palaces. There were no people in the palace, but in one palace, a beautiful woman sat on a seat. She told Ritadhvaja that she was Madalasa, the daughter of Vishvavasu, the king of gandharvas. Patalaketu, a demon had kidnapped her, and wanted to marry her. Both Ritadhvaja and Madalasa fell in love and got married that very moment, but Patalaketu got to know. He came with his army, but Ritadhvaja destroyed them all. He went back to Shatrujit. Shatrujit wanted him to go around the world protecting brahmanas. One day, he met Talaketu, Patalaketu’s brother. Ritadhvaja did not recognize him as he was disguised as a brahmana. Talaketu decided to take revenge, so he asked Ritadhvaja for his necklace, so he could earn money. Ritadhvaja gave it. Talaketu asked the prince to protect his ashrama while he went to bathe. Talaketu instead went to Shatrujit and claimed Ritadhvaja dead, and showed the necklace as proof. Heartbroken, Madalasa died. Since then Ritadhvaja was unhappy. Ashtavara decided to help. He prayed to Lord Shiva and asked him to bring Madalasa back to life, the way she had died, as a grown woman. Moreover, she would be a Jatismara. This wish was granted. He asked his sons to invite Ritadhvaja to their home. This way he united Ritadhvaja and Madalasa. Their son was Alarka, who became a very learned person.

This was a very fascinating purana as it answered some questions, and told you the stories of some Manus and different learned people. It tells you different accounts of some stories. I loved it, as it did not have many facts, but it had many stories. This made it more interesting for children to read it. It talks in detail about the different manvantaras, without making it boring. This has turned out to be my favorite purana from the other ones that I have read.
The process of creation glorifies Vishnu more, but the book talks in detail about the manvantaras and creation, so it is a Rajasika purana. I was a little confused at first. It glorified Vishnu a little more in the stories, so it should have been a sattvika purana. It also talked a lot about creation, so it meant that it was Rajasika purana. This raises a doubt in my mind on why it is Rajasika purana. To know more about this purana read the abridged version, or why don’t you try reading the original purana instead?