Young Samurai: The Way of the Warrior - Book 1, by Chris Bradford 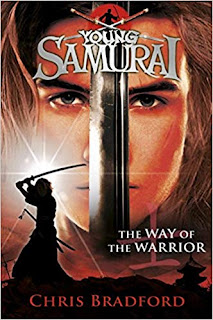 Young Samurai: The Way of the Warrior - Book 1, by Chris Bradford
Kindle IN, Audible IN

I started this series at a time when I was despairing over what I would read next. My ever-knowledgeable librarian, Pratap uncle, knew just what to give me. He handed me the first book in this series saying I should definitely read it. The author of these books is Chris Bradford. This was the first series which I have come across, where they talk in detail about the fighting arts of Japan. The first three books talk about the fighting arts of the samurai and the other five books are about the fighting arts of the ninja. The plot of the first three books, as I have only read those many, talks about a boy named Jack Fletcher, who is shipwrecked when he is on his way from England to Nagasaki with his father. He lands in Osaka with all the crew on the ship dead, killed by ninjas, including his father. He has to adapt to the way of the Japanese and also protect the navigational logbook called the rutter, his father’s most prized possession. It was the key which would guide him back to England. Unfortunately, the knowledge of the rutter has spread far and wide and has attracted unwanted attention. He is then adopted by a samurai warlord, Masamoto Takeshi and sent to a school to learn the art of being a samurai. He has to fight for his life, as a dangerous assassin and an angry fellow student are out for him, and are ready to do whatever it takes to kill him.

I liked this series because it was very well researched. The author gave proper Japanese terms and also has given a glossary at the end of the book. The different fighting arts have been explained very well, helping the reader understand what exactly was happening in the book. Most of the series and books I have read, have portrayed the protagonists to be near perfect. This series was different, as it showed all the flaws in the character and taught us an important lesson. You cannot eliminate your flaws if you do not try to or don’t work hard enough. A ninth book is coming out in 2019.