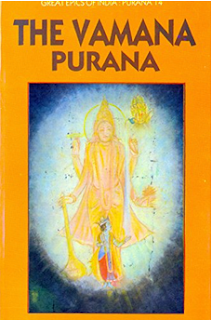 VAMANA PURANA
The Vamana Purana written by Bibek Debroy, is full of stories and interesting tales from the times of the asuras and the gods. This is the fourth review of the Puranas that I’ve written, so if you want any detailed information on what a Purana is, you can see them on my blog. Before I narrate a few stories that would catch your interest, I will tell you a bit about the Vamana Purana. The Vamana Purana is one of the eighteen Mahapuranas, and also a rajasika, as it glorifies Brahma more than Vishnu and Shiva. It is not too long, as it only consists of ten thousand couplets. The ten thousand couplets are divided into a first part, Purva Bhaga and a second part called the Uttara Bhaga. The Vamana Purana has ninety-five chapters in all.


A FEW STORIES TO SHARE
At the beginning, it talks about stories connected with Shiva. One story that really caught my eye was the story about Shiva and Vishnu.

SHIVA AND VISHNU: In the story ‘BRAHMA TRIUMPHS’, which you would have encountered before in the Vamana Purana, you would have read about the quarrel between Shiva and Brahma, during which Shiva severed one of Brahma’s heads in anger. As Shiva had committed the sin of killing a Brahmana, the head stuck to his hand, and the sin followed him everywhere. No matter where he went, it followed him. He tried to bathe in various holy rivers like the Yamuna and the Saraswati, but so severe was the sin, that the rivers dried up. He went to Vishnu, asking for advice. Vishnu suggested to him that he visit the tirtha Varanasi, present at the confluence of the two rivers Varana and Asi. In Varanasi, there was a place named Dashashvamedha. If Shiva prayed there, Vishnu told him, his sin would be forgiven. So sacred was the place that his sin left him and Brahma’s head, now reduced to a skull, fell to the ground. Shiva is also called Kapali, as a skull (kapal) was attatched to his hand. The place then also came to be known as Kapalmochana.

There is an interesting part of the story of Sati’s death that I have never read of before. When Sati died, the moment the yagna that Daksha was performing was complete, the yagna took the form of a silver deer and fled from the spot, scared of Shiva’s wrath. Still mad with anger about Sati’s death, Shiva chased the deer. It fled to the skies, and Shiva chased it there, becoming the constellation Orion (Kalapurusha). The head of the constellation is mesha (Aries), the face near vrisha (Taurus), the arms near mithuna (Gemini), the heart near simha (Leo), the sides near Karkata (Cancer), the stomach near kanya (Virgo), the navel near tula (Libra), the waist near vrishchika (Scorpio), the thighs near dhanu (Sagittarius), the legs near makara (Capricon), the ankles near kumbha (Aquarius) and lastly, the feet near mina (Pisces). This is the origin of the Zodiac signs.

SAMVARANA AND TAPATI: Samvarana was the son of King Riksha, who was present during the satya yuga. He fell in love with Tapati, the daughter of Surya. They soon married and had a son named Kuru. Kuru learnt the Vedas and was righteous. After Kuru turned sixteen, Somvarana married him to a beautiful woman named Soudamni. Kuru became king after his father. Time passed, and then he wanted to do something, so that people would forever remember him. He roamed the entire Earth, and came upon a forest named dvaitavana, where the river Saraswati flowed. There was a pond in the forest, near which one of Brahma’s seats was there. Brahma has five seats on Earth, and this one was called Samantapanchaka. Kuru decided to plough the land near Samantapanchaka. He constructed a golden plough for his task. He planned to cultivate the fruits of meditation, truthfulness, pity, forgiveness, cleanliness, charity and other good things there. Indra saw him ploughing the land and asked him for the seed, so that the fruit could be grown. Kuru did not reply. After Indra left, Vishnu arrived and asked the same question. This time Kuru answered that the seed was inside him. Vishnu wanted the seed, so that he could sow it, while Kuru could keep ploughing. Kuru stretched his right arm, and Vishnu sliced it up with his Sudarshan Chakra, to find the seed, but nothing was there. No results were produced even after his left arm and both his thighs were chopped up. After this, Kuru offered his head. Vishnu was extremely pleased with this. Kuru asked Vishnu for the boon, that the ploughed part of the land would be a fertile and a holy place. People should perform yajnas here. It should be called Kurukshetra, after him. Vishnu granted this boon to Kuru and left.
This is the story of the place Kurukshetra. I’ve heard of another version, that Kurukshetra is named after the fight of the Mahabharata, or the fight of the Kurus. Kurukshetra as in the battlefield of the Kurus.

MY VIEWS ON THIS PURANA

This Purana was my favourite of the other four I’ve read so far, counting the Vamana Purana. It was my favourite, mainly because it contained a lot of stories, most of which were new to me. I never got bored reading this Purana. It had different versions of some stories, or some slightly altered versions of that story. It is not tough to understand the book, and gives you enough information to have a general idea of the stories and text that would be included in the original version of the Purana. The stories were short, yet interesting. I did not feel this to be a Rajasika purana, as it glorifies Shiva and Vishnu more than Brahma. This purana, did not stick to stories of the gods only, and told us about the whereabouts of the asuras also. It looks like Bibek Debroy really has a knack of writing things like this, and would recommend children to also read it. Kids who are 9 and above should be able to read it. In my opinion, kids should also be the ones who read it, not only the elderly ones.