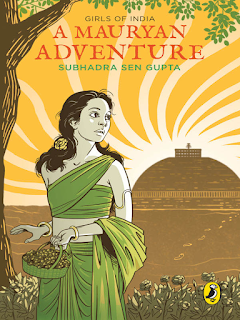 Fiction: History: Mystery
Age: around 9-12
Reviewed by: Anvita
Buy from: Amazon US, Amazon IN, Kindle

This book is written by Subhadra Sen Gupta. She has set thus fictional story in the time of King Ashoka, and the storyline talks about a girl named Madhura, and about a conspiracy that wants to overthrow King Ashoka. It is how Madhura and her brother Karthik, a spy, along with the help of Kamalika, a dancer who is also a spy, find out about the conspiracy and catch the culprit. I really liked this book as it portrayed Madhura as a girl of strong 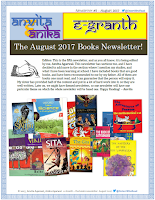 character, which rarely any books do. She describes whatever is happening in the story very well, and one can vividly imagine what is going on. My favorite part of the book was when Madhura helped Princess Sanghamitra sneak out to the bazaar alone. Sanghamitra longed to visit the bazaar alone with Madhura without the large entourage of guards who would escort her anywhere outside the palace. The guards wouldn’t give her the space she wanted and she couldn’t sit and chew paan, or eat the delicious, mouth-watering food from the roadside shops. This brings out another characteristic of Madhura. She is observant, and was the only one who noticed that the guards never checked the maids, who would pull their fine muslin dupatas over their head, and cover their face. This made it easy for Madhura and Sanghamitra to escape unnoticed. The story is written in simple, understandable English, and an age group between 9-12 would enjoy it because it has a mystery and adventure, which this age group enjoys.