The Clever Kitten, by Enid Blyton 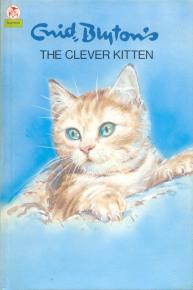 The Clever Kittne, by Enid Blyton

This is one of Enid Blyton's short stories that I really liked, so I have given it below so that you can enjoy it as much as I did.


Elsie's birthday was coming soon. She was throwing a birthday party all her best friends and relatives. She was dying to have a pet. She was very fond of animals. When her birthday was coming near her parents thought of what they should buy for her. Her mother thought of buying her a big and nice workbasket. Her father thought Elsie would like to have a pet. Elsie always thought having a pet was lots of fun. It was a day before her birthday and she was given ten pounds from her mother. She went to a shop nearby her house to buy a birthday present for herself. She looked inside the shop and saw a nice big workbasket right at the front of the shop. She asked her mother that she wanted to buy it. Elsie spent nine pounds on that workbasket. When she was looking at the back of the shop she saw the nicest, fluffiest white kitten in the shop. She stroked the kitten gently and because of this action the kitten stretched and was awake. It jumped into Elsie's arms because it thought she was the nicest girl the kitten had ever met. Elsie showed her mother the kitten and then asked the shopkeeper how much was the kitten. The shopkeeper replied that it was for ten pounds but she only had one pound left. She asked her mother that can she buy the kitten instead of the workbasket but her mother said no because she had already chosen the workbasket so it was supposed be the workbasket. Elsie was so sad she gently put the kitten back on the pillow. The kitten leaped up into Elsie's arms. Elsie put it back into it's right place. It was the time to pack the present. The kitten wanted Elsie so badly that when the shopkeeper girl was going to get a bag to put the workbasket in the white kitten quietly slipped into the workbasket. When the shopkeeper girl was going to give the workbasket to a girl to deliver she thought it was a bit heavy from before but she did not bother to look inside. The girl who had to deliver left at midnight and delivered it safely to Elsie's house. The very next day it was Elsie's birthday. She had many gifts they all were piled up together. There was a doll from her aunt, a book from her grandmother, a pincushion from the cook, a box of sweets from the housemaid, ten pounds from her father and a workbasket from her mother. The kitten smelt mice in the house so she quietly slipped out of the basket and caught the mice to eat. She peeped out of a basket and saw Elsie's mother laying breakfast. She was joyful. She knew Elsie will be out any moment! Elsie came out and looked at all the lovely presents lying in one heap. She was delighted. When she opened the workbasket she saw the lovely white kitten inside. She squealed in delight. She thanked her parents for buying the kitten. Her parents were very puzzled. They looked at the kitten and told Elsie that the kitten had sneaked in when the shopkeeper girl was not looking. They told Elsie that they have to return the kitten to the shopkeeper girl. When they were on their way to the shop. Her father shouted" Elsie you are such a goose. How much money did I give you today?" Elsie replied ten pounds. Her father asked again How much does the kitten cost? Elsie replied ten pounds! She took her ten pounds with her and told the shopkeeper girl everything. She gave her the money and bought the kitten. Since the kitten was so furry and it's fur was as white snow she named him Snowball. Wasn't she very lucky.