George followed the people untill they reached the balcony.On the other side of the balcony he saw a room where chocolate was made.George was curious.He climbed down the balcony and up onto a machine. George peeked inside a machine. All of a sudden the chocolates started coming out extra fast.’’ Quick! Bring in more boxes’’ yelled a worker. Nobody noticed George. The workers kept on becoming slow but the chocolates were coming fast. Meanwhile George  saw his favourite chocolate whiz by. He tried catching it but was not able to. He chased it to the end of the belt. At the end of the belt he saw a pile of chocolates. 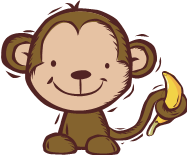 He had never seen so many chocolates. He ate all banana cream chocolates and put all the other chocolates in the boxes. Someone saw him and told’’Get that monkey more boxes! He is helping us catch up. Just then the guide came in with the man in the yellow hat and screamed ‘’Get that monkey out of here it’s ruining our chocolates’’.’’He saved our chocolates’’ explained the workers to the guide. One of the workers gave him a box of chocolates but George said no the man in the yellow hat asked if he was sure? George was sure.
THE END